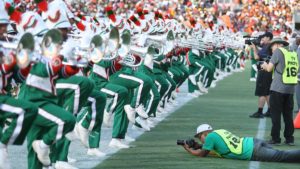 It happens every year. It’s a halftime show where a football game took place. It’s the Florida Classic. Florida A&M University battles in-state rivals Bethune Cookman University on the gridiron. The game has been happening since 1925, and has become the largest HBCU football game in the country.

In yesterday’s game, Bethune Cookman took advantage of FAMU mistakes to steal a 29-24 win in from of a crowd of over 47,000 fans at Orlando’s Camping World Stadium. 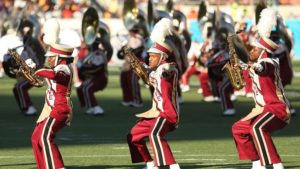 Yes the bands were there. Florida A&M’s world famous “Marching 100” as well as the well respected “Marching Wildcats” of Bethune Cookman did not disappoint. Both performed dazzling halftime shows of precision marching, and dancing while playing r&b classics and current tunes.

Cookman was not done. They were just looking for an opportunity. It has to be disheartening for Florida A&M when a botched fake punt was just what arch rival Bethune-Cookman needed. The fake punt gone bad was the momentum change that propelled BCU to their 7th straight Florida Classic win.

“Bad communication from me … bad coaching choice,” Wood said. “We had a plan for it in the first half … but it was not part of the plan when you go ahead, especially on the short field. It’s one of those things … if it works, we’re all geniuses.

“It was not supposed to be called and that’s poor communication that falls to me. That single-handedly lost this football game. … That should have never been on the table and we should have communicated that to him better.”

The play gave the Wildcats the ball on the FAMU 32. 5 plays later, they scored a touchdown on a Larry Brihm 5 yd run.

After another FAMU punt, Brihm led the Wildcats on a 12-play, 78-yard drive that Brihm capped with a bootleg scamper all alone to the end zone. The Wildcats extra point attempt was blocked, but BCU managed another drive to score with 1:15 taking the game to a 29-24 final score.

The loss was a devastating blow to the FAMU program, which could have used a big boost like a victory in the Classic. Wood is at the end of his three-year contract and his job very much looks to be in jeopardy.