The Cleveland Indians will stop using the Chief Wahoo logo on their uniforms beginning in 2019, according to Major League Baseball. The popular logo was deemed no longer appropriate for use on the filed.

The logo has long been the source of anguish and frustration for those who consider it offensive, outdated and racist, but for many of the team’s fans it is a cherished insignia.

Chief Wahoo, a cartoonish caricature of a Native American that has assumed several forms over the years, first appeared on the Indians’ uniforms in 1948. In recent decades various groups across North America have appealed to the team to renounce the logo, to no avail. But over the past year the commissioner of baseball, Rob Manfred, has pressured Paul Dolan, Cleveland’s chairman and chief executive, to make a change.

Citing a goal of diversity and inclusion, Manfred said in a statement provided to The New York Times that the Indians organization “ultimately agreed with my position that the logo is no longer appropriate for on-field use in Major League Baseball, and I appreciate Mr. Dolan’s acknowledgment that removing it from the on-field uniform by the start of the 2019 season is the right course.” 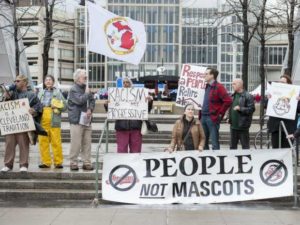 Phillip Yenyo, the executive director of the American Indian Movement of Ohio, cheered the decision as “another step in the right direction” but lamented that the move was being put off for a year. “Why wait?” he said. “If you are going to go this far and get rid of it, why not do it now? All they are doing is testing it out, because the name has to go, too. The nickname absolutely has to go. It’s not just the logo.”

Cleveland has been edging away from the logo in recent years and has used it less frequently, but beginning in 2019 it will not be seen at all on the team’s uniforms, or on banners and signs at Progressive Field, the team’s stadium. Consumers will still be able to purchase items with the logo on them at the team’s souvenir shops in the stadium and at retail outlets in the northern Ohio market, but those items will not be available for sale on M.L.B.’s website.

“We have consistently maintained that we are cognizant and sensitive to both sides of the discussion,” Dolan said in a statement issued by M.L.B. “While we recognize many of our fans have a longstanding attachment to Chief Wahoo, I’m ultimately in agreement with Commissioner Manfred’s desire to remove the logo from our uniforms in 2019.”