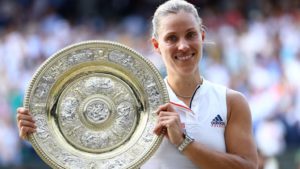 This is the third major title for Kerber and the first final for Williams after taking a break for the birth of her daughter Olympia.In the process, Kerber denied Williams a 24th career Grand Slam title, which would have tied Margaret Court’s all-time mark.

“It was such an amazing tournament for me,” an emotional Williams said after the match. “I was really happy to get this far. It’s obviously disappointing, but I can’t be disappointed. I have so much to look forward to. I’m literally just getting started.”

After giving birth to her daughter, Olympia, on Sept. 1, Williams dealt with health complications that included blood clots and led to what she said were multiple operations. 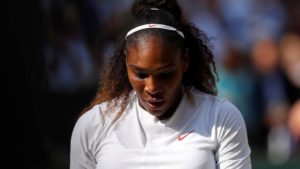 Williams played doubles with her sister Venus Williams at the Fed Cup in February. Williams returned to the tour in March, making limited appearances without much success. After another two months away, she played in the French Open in May, withdrawing in the fourth round with an injured pectoral muscle.

Kerber is one of just five women to beat Williams in a Grand Slam final — having also beat her to win the 2016 Australian Open — and joined Venus as the only ones to do it twice as Williams fell to 23-7 in the final of a major.

“I knew that I had to play my best tennis against a champion like Serena,” said Kerber 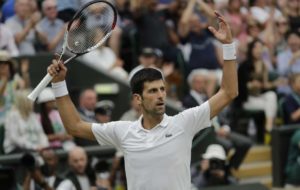 Novak Djokovic survived a marathon, two-day match against Rafael Nedal to advance to the Wimbledon Men’s Finals. Djokovic is going for his fourth Wimbledon title. In the 52nd career meeting between the two players, Djokovic, the No. 12 seed, held on for a 6-4, 3-6, 7-6 (9), 3-6, 10-8 victory on Saturday at the Saturday on Centre Court at the All England Club.

The total match time was 5 hours, 15 minutes, making it the second-longest semifinal match in terms of duration in Wimbledon history.

“It really could have gone either ways,” Djokovic said. “Basically until the last shot, I didn’t know if I was going to win.”