The changes at ESPN keep coming as two more major stars will be making moves. 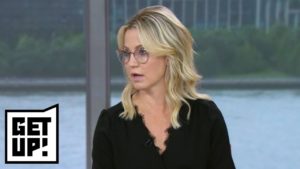 ESPN announced on Friday night that Former ‘Sports Nation’ and current ‘Get Up’ host Michelle Beadle will be leaving the morning show.

Beadle will serve as ESPN’s NBA Countdown’s host for a third straight season and will also be part of ESPN’s new NBA post-game show, After The Buzzer. In addition, the Worldwide Leader is launching a new pregame show called NBA Courtside, a 15-minute tipoff show that will air following NBA Countdown ahead of game coverage.

The moves have led to Beadle’s departure from Get Up! On Thursday, Beadle caught flak for stating on air that she doesn’t watch football anymore while discussing Ohio State head coach Urban Meyer’s suspension and the situation’s handling by the program. 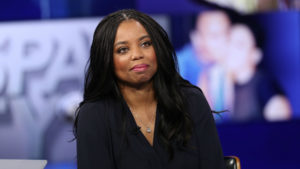 It was announced Saturday night that popular and controversial host James Hill has reached a buyout agreement with the network and will be leaving in September.

According to noted author and media reporter James Miller.

Hill’s reported departure is said to be “amicable” and includes a buyout. The move comes after she requested a meeting with ESPN president Jimmy Pitaro.

ESPN suspended Hill for two weeks in October 2017, after her series of tweets calling for an advertiser boycott of Cowboys owner Jerry Jones. Her tweets came after Jones said his players would be benched if they did not stand for the national anthem.

In January, Hill left SC6, the 6 p.m. edition of Sportscenter, to move to the Undefeated, ESPN’s microsite that combines sports, culture and race, as well as other assignments.