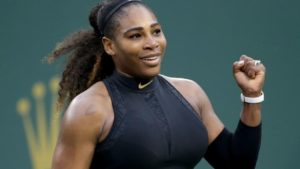 Forbes Magazine released its annual list of highest-paid female athletes on Tuesday and Williams took the top spot. Williams earned a whopping $18.1 million between June 2017 and June 2018, the magazine estimates.

If that wasn’t impressive enough, Forbes reported that the tennis star only earned $62,000 in winnings during the 12-month period because she took time off to give birth to her daughter, Olympia. The tennis champ took a 14-month break to have her daughter starting in January 2017, which means she only worked for four months of the 12-month period Forbes analyzed.

Williams, 36, earned the rest of her million-dollar pay day through endorsement deals with Nike, Intel, Gatorade and Beats, along with her new fashion collection Serena. This is the third straight year Williams (who sits on the board of advisers to Oath, HuffPost’s parent company) has topped Forbes’ list of highest-paid female athletes.

Tennis player Caroline Wozniacki came in second on the list with total earnings of $13 million, $7 million of which came from prize money and $6 million from endorsements. The rest of the top five highest-paid athletes are all tennis players, including Sloane Stephens ($11.2 million), Garbine Muguruza ($11 million) and Maria Sharapova ($10.5 million). Serena Williams’ sister Venus Williams came in sixth on the list, earning $10.2 million.