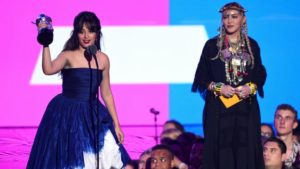 The event falls short of the 2017 ceremony, which had the previous record-low audience.

For the second straight year, the MTV Video Music Awards drew its smallest audience ever.

The awards also aired on a ninth Viacom network, TV Land, for which numbers weren’t immediately available. It is highly unlikely, however, that enough people tuned in there to push the VMAs past their 2017 on-air total of 5.36 million viewers and 2.6 rating in adults 18-49.

The 2017 awards also aired opposite a huge Game of Thronesfinale on HBO; the heaviest head-to-head competition on cable Monday was WWE Monday Night Raw on USA (1.1 in 18-49, 3.1 million viewers) and an NFL preseason game on ESPN (0.8, 2.66 million).

The VMAs suffered even steeper declines among MTV’s core viewership of teens and young adults. In the 18-34 demo, the show’s 1.2 rating fell by almost half — 47 percent, to be precise — from 2.2 a year ago. It declined by similar percentages in the 12-34 cohort.

Camila Cabello won video of the year honors at the VMAs for “Havana,” and Jennifer Lopez received the Video Vanguard Award. The show also featured a tribute — of sorts — to Aretha Franklin by Madonna.