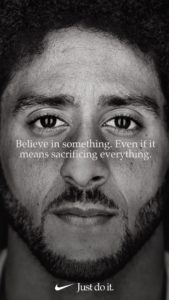 The official apparel company of the NFL is launching an ad campaign around a player who’s alleging the league is colluding to keep him out.

Colin Kaepernick is the face of a Nike advertising effort commemorating the 30th anniversary of its “Just Do It” motto.

“Believe in something, even if it means sacrificing everything. #JustDoIt,” Kaepernick tweeted Monday — Labor Day — the words superimposed on an image of his face. The Nike swoosh accompanies the image.

Kaepernick was a quarterback for the 49ers for six years and sparked a national debate when he knelt during the national anthem during the 2016 NFL season to protest racial injustice and police brutality.

The protests during the national anthem have raised the ire of some NFL fans and President Trump, who has said they disrespect the American flag and the military.

After he opted out of his deal following the 2016 season, Kaepernick has remained curiously unemployed. He has filed a grievance against the league in a case that is moving forward.

Kaepernick renegotiated a multi-year deal with Nike, according to the Associated Press.

Williams this past weekend praised Kaepernick and ex-49ers teammate Eric Reid after the two drew a standing ovation from the U.S. Open crowd.

“I think every athlete, every human, and definitely every African-American should be completely grateful and honored how Colin and Eric are doing so much more for the greater good, so to say,” Williams said at a press conference.