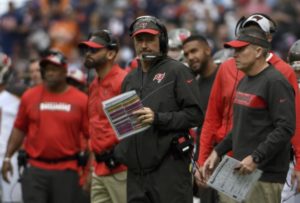 The Tampa Bay Buccaneer’s went from offensive juggernaut to doormat today as they were drummed by the Chicago Bears 48-10 at Soldier Field today.

To say the they had a bad game wouldn’t be 100 percent accurate. It was much worse than that. The Buccaneers were completely dominated on the field. It’s the type of performance that should lead to a lot of people getting fired.

If you think we’re being harsh, those aren’t even our words. That’s exactly what Bucs head coach Dirk Koetter told reporters after the game.

“Based on that game today, we couldn’t make enough changes,” Koetter said, via NFL.com. “We should fire every person that was on that field today, starting with me. That was horrific.”

Bears quarterback Mitchell Trubisky threw for six touchdowns in the win. He managed to set the Bears record for most passing touchdowns in a game before halftime.

And it wasn’t just that Trubisky was able to shred the Bucs defense. The Bears receivers were somehow getting wide open play after play. Some of that might have been due to clever offensive scheming, but some of it may have also been terrible defensive play.

Offense was tough to come by for Tampa Bay. Ryan Fitzpatrick’s magic seemed to run out. He was benched mid-game for Jameis Winston, who threw a touchdown, but added two interceptions. The Bucs offensive line had issues with Chicago’s pass rush. Khalil Mack was once again all over the place, picking up a sack, a forced fumble and tipping a pass that led to one of Winston’s interceptions.

With the loss, the Buccaneers dropped to 2-2 on the season. Though the loss to the Bears was horrific, it’s not like the team isn’t in a terrible spot moving forward.

Maybe Koetter’s speech inspires the Bucs to go on a run after their Week 5 bye. Maybe he isn’t around to see that if the higher-ups decide to follow through on Koetter’s postgame comments.