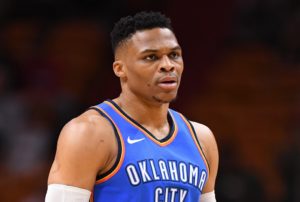 Oklahoma City Thunder star Russell Westbrook underwent arthroscopic surgery on his right knee on Wednesday. The procedure will keep him on the shelf for at least the next four weeks, and which could knock him out for Oklahoma City’s preseason slate — and perhaps longer.

“The Thunder, Westbrook and his representation determined that after he experienced inflammation in his knee this past weekend that the best course of action was the proactive procedure, performed by Dr. Neal ElAttrache with Thunder medical personnel present at the Kerlan-Jobe Orthopaedic Clinic in Los Angeles,” the team announced in a Wednesday statement. He’ll be re-evaluated in a month, and next steps will be determined from there; if things don’t check out 100 percent in four weeks’ time, it’s possible Westbrook could miss the Thunder’s Oct. 16 opener against the rival Golden State Warriors.

This marks the fourth surgery for Westbrook’s right knee. The first came nearly 5 1/2 years ago, when he suffered a torn lateral meniscus during a collision with then-Houston Rockets point guard Patrick Beverley during Game 2 of their opening-round 2013 playoff series.

Westbrook wound up going under the knife again just before the start of the 2013-14 season, an arthroscopic procedure aimed at alleviating swelling in the surgically repaired right knee. He made a surprise return for the third game of that season, making 25 appearances … before once again needing a pressure-alleviating scope right after Christmas that sidelined him through the All-Star break.

After those three surgeries in a nine-month period, though, Westbrook came back at full strength and full speed, and has looked none the worse for wear since.

He’s missed just five games in the last three seasons despite his electric and relentlessly physical style of play.