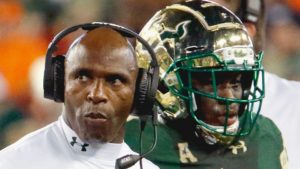 Year two of the Charlie Strong era for USF Football will begin on Saturday at 6 p.m. when the Bulls officially kickoff the 2018 campaign against visiting Elon.

In ‘Strong year 1’, the Bulls finished the 2017 regular season in 2nd place in the East division of the American Athletic Conference, and they ended their season with a 38–34 victory over Texas Tech in the Birmingham Bowl, finishing with a record of 10–2.

The Bulls have to fill a lot of spots, including replacing star QB Quinten Flowers. There are also holes in the defensive line. Special teams remains a big question for the team.

Tonight’s game against the upward trending Elon Phoenix team will answer some questions about the 2018 Bulls.

Elon had served as a proverbial doormat in both the SoCon and CAA prior to 2017, suffering losing seasons for six straight years from 2011-2016.

His impact was immediate as the Phoenix started the season off 8-1 reach as high as No. 7 in the FCS rankings.

These teams have met three times in the past, Elon won 41-13 in USF’s inaugural season in 1997 before the Bulls returned the favor with a 35-7 the following year in Tampa.

The Green and Gold would open the memorable 2007 season with a 28-13 victory over the Phoenix.