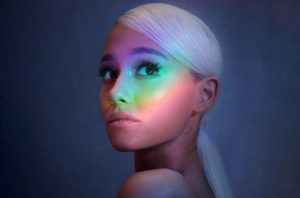 Billboard has named Ariana Grande its 2018 Woman of the Year.

In an article published Tuesday, Billboard noted that the 25-year-old has had “an incredibly successful year.” The singer’s recent album “Sweetener” became her third album to top the Billboard 200 chart.

Grande “is a star on her own terms, never bending to any particular musical trend or path in the industry,” Ross Scarano, Billboard’s vice president of content, said in a statement.

“Certain in her convictions, she consistently stands up for herself and her decisions in a world that often isn’t hospitable to that sort of strength in young women,” he said. “She’s got guts, she’s making some of the best music of her career, and she’s absolutely deserving of Woman of the Year.”

Billboard also recognized Grande’s activism, saying she “uses her platform and strength to support causes she believes in.”

Grande, who released a new song called “thank u, next” over the weekend, responded to the news on Twitter, calling it an “honor.”

The singer will receive an award at Billboard’s 13th annual Women in Music awards gala in New York on Dec. 6.