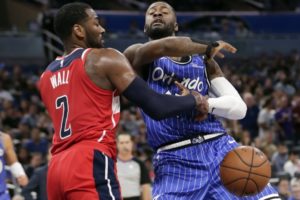 The Orlando Magic came out of the tunnel tonight looking like a contending team, and took out the struggling Washington Wizards 117-109. In a night where the franchise is celebrating Veterans, some Magic veterans were in town as well. Rashard Lewis was at Amway to be honored by his old team, and Dwight Howard, Jeff Green and for Winter Park Hight School star Austin Rivers are all on the Wizards roster.

The impressive this is that the Wizards usually have no trouble with the Magic. They have beat Orlando in 17 of the past 20 games against them.

The Magic last left the Amway floor with coach Steve Clifford railing on them about a lack of effort by the second squat and “how embarrassing” there performance was.

When asked how tonight’s perform was compared to the last game, Clifford responded “Night and day to me, night and day.  I think in the first half, really, really good. Again, both ends of the floor. offensively and defensively.”

Lewis, who chose Orlando in free agency back in 2007 and served as a guiding force on the Magic team that reached the 2009 NBA Finals with his dead-eye 3-point shooting, talked to the franchise’s current-day players on Friday morning about “consistency and approach.’’

The Magic got off to a slo start, falling behind 11-2, but turned things around after a Clifford time out. the Boys in Blue shot 4 for 8 from deep and shot 55% in the first half to go into the locker room up 31-23 at halftime.

The Magic had the game in had for three quarters, and withstood a Washington attack, mainly by an aggressive John Wall and Bradley Beal, to hold on for the win.

The Wizards whittled a 20 point Magic lead to a tie with minutes left.

`We let them get back in the game, which happens in the NBA, but we stuck with our composure and finished the game,’’ said Magic point guard D.J. Augustin, who played a big role in the victory with two big plays after Washington had gotten to within one of Orlando. “We all know that we have to finish that game off. We lost a game (on Wednesday) night because we didn’t finish the game. Moving forward, we know that we have to not let up until the end.’’ 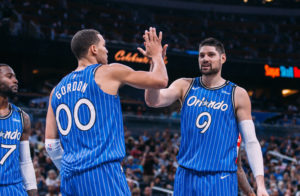 Washington has the NBA’s worst defense, and it was music to the Magic’s ears. It proved to be the perfect antidote Orlando’s shooting struggles on the season. The Magic carved up a Wizards’ defense that came into the game ranked 30th in points allowed, 29th in 3-point percentage allowed and 25th in field goal percentage surrendered for 51.2 shooting.

The Magic are starting to get into the habit of upping their level of play after bad performances.

“`I’m just waiting for the time when it doesn’t take a loss to spark us and we can get that consistent play,’’ Gordon said. “Rashard Lewis was talking to us today and said if he could give us two words that were important it was consistency and sacrifice. Those are important to having a successful team and I hope the rest of the guys took that in.

The Magic head up to New York to face the New York Knicks and former Orlando forward Mario Hezonja when they face the Knicks at Madison Square Garden on Sunday night.