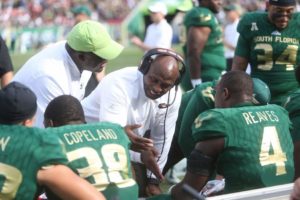 As far as Strong sees it, the game was a total failure os all lives of the team, from coaches to players, commitments, preparation, and execution.

“We were god awful out there,” Bulls coach Charlie Strong said. “For us to come out and play the way we played … it’s on the coaches. and I told our players that Thursday I saw it coming and didn’t say much. Then even today during pregame warmup I saw it coming. I said, ‘I know we’re not ready to play, we’re not focused.’ It’s just the little things, and they catch up with you.”

The Bulls came out of the gate with a drive with a nice 38yard QB keeper by Blake Barnett. But, as with last week’s 57-36 defeat to Houston, the drive was stopped at the 4 yd line and USF couldn’t score in the red zone. The Bulls had to settle for a field goal. 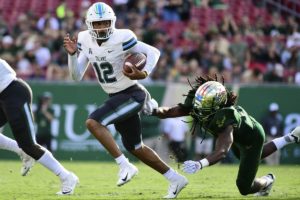 Tulane ran off 34 straight points on the Bulls, and looked unstoppable in the ground and air. The halftime score one 27-3 at killed the hopes of the Bulls pulling back from their first loss of the year last week.

Tulane (4-5, 2-3), which has lost to the likes of UAB, Wake Forest and SMU, gashed the Bulls for 368 rushing yards, becoming the fifth USF opponent this season to collect 220 or more yards on the ground.

“It’s more of gap control,” Strong said. “Guys jumping out of their gaps and overrunning the football, and the ball cutting back … and just not having the explosive plays on offense.”

Quarterback Blake Barnett finished as USF’s top rusher (16 carries, 59 yards), throwing for 205 of his 332 yards after halftime, when the Bulls had to throw.

After posting at least 200 yards on the ground in 31 of of the last 37 games, the Bulls totaled up just 110 yards and turned it over three times, including two lost fumbles.

It’s the first time USF has lost consecutive games since 2015 and the first time the Bulls have dropped back-to-back conference contests since the 2014 season.

With a conference title just about out of reach, USF will try and rebound on Saturday at Cincinnati. Kickoff time is TBA.

“We will not quit, we will go out and compete,” Strong said. “We have to play better and show better, the sense of urgency and how we go about things is critical.”