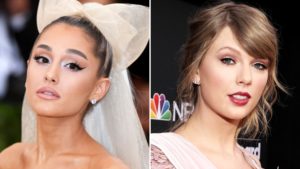 The nominations for the 2019 Grammy Awards were announced on Friday, December 7, and the artists honored in the major categories include Cardi B, Drake, Kendrick Lamar and Lady Gaga. But surprisingly, some of the biggest and most talented names in music were snubbed.

Ariana Grande
The pop star, 25, scored two nominations (Best Pop Vocal Album for Sweetenerand Best Pop Solo Performance for “God Is a Woman”), but she came up empty-handed in the top categories. Sweetener has been dominating streaming platforms since its August release, and many critics predicted that it would be recognized in the Album of the Year category. Grande’s hit single “No Tears Left to Cry” also went completely unnoticed. Her latest, “Thank U, Next,” didn’t score any nods either, but that’s because it dropped after the eligibility period.

Taylor Swift
With 31 past Grammy nominations and 10 wins under her belt, the country-turned-pop superstar, 28, was surprisingly overlooked this year. Reputationreceived a nomination for Best Pop Vocal Album, but that’s it. Sure, the record wasn’t as acclaimed as Red and 1989, but at least one of its singles (Remember “Look What You Made Me Do” and “Delicate,” anyone?) should have been nominated.

Nicki Minaj
The hip-hop legend, 35, unleashed some of her fiercest tracks to date on her album Queen, but she was completely shut out of the list of nominees. Meanwhile, her rival Cardi, 26, landed five nods, including Album of the Year for Invasion of Privacy and Record of the Year for “I Like It.” Ouch.

Travis Scott
The rapper, 26, released the bestselling album of his career yet and even admitted that he had the Grammys in mind when he recorded it. Despite hit collaborations with Drake and John Mayer, Astroworld did not earn any major nominations. Scott (who shares 10-month-old daughter Stormi with girlfriend Kylie Jenner) was recognized in three of the four rap categories, though.

For a complete list of nominees, visit: 2019 Grammy Awards