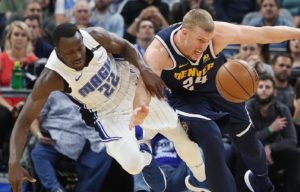 The Orlando Magic (12-13) returned home after a grueling two week road trip to lose to the Western Division leading Denver Nuggets (16-7) 124-118 in overtime.

The Magic were a little slow pulling out of the gate, and had to fight back from a 12-point deficit in the first quarter.

The rest of the game went back-and-forth in what turned out to be a wild shootout. Magic head coach could clearly see what the problem was.

“Our offense was more than good enough to win, and we can look at all these other things – did they step out of bounds and the free-throw differential and all that,’’ Clifford said through a voice cracking after yelling through 53 minutes of game action. “But the bottom line is we couldn’t guard a high-pick-and-roll, which is hard to do. But we’ve got to do a lot better than that.’’

The positives are that the Magic continue to hit well from deep with 20 3-pointers, including hitting 8 in the third quarter, tying a franchise record for 3’s made in a quarter.

The negatives, besides the high pick and roll deficiency: free throws.

While Denver had 37 free throw attempts, the Magic had only 8, and even though they took advantage and hit all 8, the difference in the number was ridiculous.

“It was just terrible. Terrible. It’s the same thing every day, man. Every day we come in and we see on the board that we’re 30th in free throw attempts, nothing changes,” said guard Evan Fournier, who fouled out with six personal fouls and also had two technical fouls, and was ejected with 2:00 left in overtime and Denver holding on to a slim 115-114 margin.

“We’re one of the teams that never complains and every time we say something, we get a technical. It’s just terrible. … Never stops, man. Of course it’s frustrating, man. We’re fighting hard. It’s OK to not get the calls, but sometimes it’s just unfair. You can’t have that. It’s just not possible.”

On one play, Fournier was whistled for a personal foul when he had stepped in front of big Denver center Nikola Jokic.

“I was fronting Jokic, dude is seven-footer. I was not even grabbing. I had my two hands up like this. It’s not a foul. It’s just terrible. We’re one of the teams that never complains. Never. That’s why we all get frustrated, because we never complain, and we never get the calls and now we start to say something and we get technical after technical. What is that?”

Fournier, who had 26 points and six 3-pointers.

“It’s horrible. It’s horrible,” Gordon repeated. “It’s just tick-tack after tick-tack that they get and then we come down, same type of play … I feel like the refs are more worried about what’s on the front of the jersey than watching the actual game.

“I try not to pay too much attention to it, but, you know, play a full NBA game and shoot four free throws or something like that … and overtime. It’s ridiculous.”

The Magic came into the game with a 12-12 record and came close to breaking over .500 since October.

Added Vucevic: “We played a really good game offensively and made 20 threes, but we just couldn’t get stops consistently. They’re a good team, they have a lot of good scoring options and they do a very good job of running their stuff, especially through Jokic. It’s always tough when you take a team to overtime and lose, but we definitely could have done a better job defensively.’’

Orlando’s 20th 3-point shot came on a Clifford scene that got Guard Terrance Ross a clean look at the basket and drilled a 27 foot shot. Denver’s Murray got off a fade-away shot in the final second of regulation, but it rimmed out and the two teams headed to overtime.

In overtime, the Magic looked like the road trip and the fact that Wednesday’s game was a back to back game after the Magic defeated the Miami Heat the night before.

The Magic managed only six pointes, while Denver dropped 12 to take the game.

The Magic next face the Indiana Pacers at AMway Center on Friday.