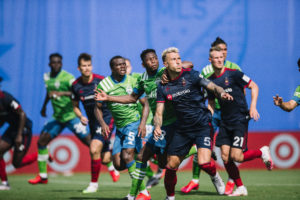 LAKE BUENA VISTA, FL – On an incredibly hot day in the Florida summer, the Chicago Fire defeated the Seattle Sounders 2-1 at the ESPN Wide World of Sports Complex at Disney World yesterday.

As with most of the matches here at the MLS is Back Tournament, players kneeled and had a moment of silence as a show of unity with the Black Lives Matters movement before the match. This has been consistent for all of the matches that we have covered, as well as all players and coaches had worn Black Lives Matter t-shirts pre-game and on the bench, another sign of unity.

The new look fire, with new coach Raphael Winky and their new look, came out of the box ready to play. 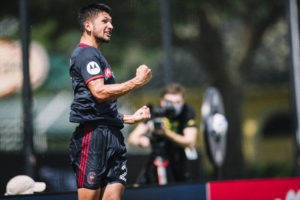 Robert Beric started the scoring in the 52nd minute when he got his foot on a bouncing ball in midfield, worked his way through traffic with pace, and tapping the opening goal past Stefan Frei for a 1-0 Chicago lead.

Seattle struck back in the second half, when Jordan Morris got to the box dragged back a perfect pass to an onrushing Handwalla Bwana for the equalizer in the 77th minute.

Marucio Pineda came through with the game-winner on a corner kick in the 84th minute, finishing a bouncing ball at the back post.

This win puts Chicago in the lead in Group B of the Tournament, but puts pressure on the Sounders as they next face the Vancouver Whitecaps on Sunday July 19th ash 10:30pm ET.

Chicago next faces the San Jose Earthquakes on the same day at 8pm ET.