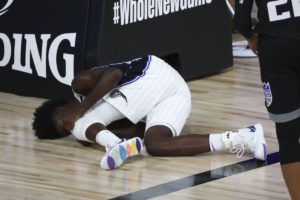 KISSIMMEE, FL – The Orlando Magic defeated the Sacramento Kings 132 – 116 last night , but lost a key player of their playoff run plans. Jonathan Isaac went down with a torn ACL in the fourth quarter of the game, devastating the team.

With 9:19 left in the game, the 6-foot-11, 210-pounder drove into the lane and attempted to split two defenders as he approached the basket. Isaac was untouched on the play and immediately started clutching his knee as he was in the middle of his hop step. After being attended by medical staff for several minutes, he was taken off the floor in a wheelchair.

IT IS WELL!!! 2 Kings 4! Thank you for all of your prayers and concerns I’m encouraged. Remember our God is not just a God of the hills but a God of the valleys! (2 Corinthians ch 4 vs 9!) MY COMEBACK WILL BE GREATER THAN MY SETBACK!!!! I STILL STAND IN JESUS NAME!!!!

That was tough man, that one brought me to tears instantly, just because I know how good of a guy J.I. is and I know how hard he works and how hard he has worked to get back since hurting himself in D.C.,” Magic teammate Aaron Gordon said. “That one is tough.”

What makes it even tougher to deal with is that Isaac had worked incredibly hard just to put himself in a position to return to game action for the NBA season restart after recovering from a Jan 1 from a posterior lateral corner injury and a medial bone contusion to the same knee.

Isaac’s return will depend on how he responds to treatment.