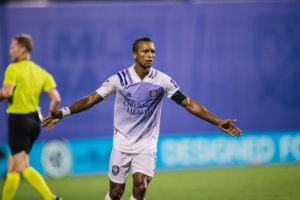 KISSIMMEE, FL – Orlando City SC defeated Minnesota United FC 3-1 in the MLS is Back semifinals to move into the tournament finals.

The winner of this match moves on to face the Portland Timbers in the MLS is Back Tournament finals on August 11th.

Nani out through  a stunning, sliding score after splitting two defender and skidding a ball pst Minnesota goalkeeper Tyler Miller (before he can move it) into the goal in the 36th minute.

Nani got open later in the match for a masterful 20 ft shot into the upper corner of the net for his second score in the 42nd minute. 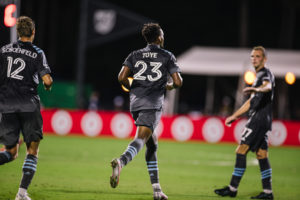 The Loon’s Mason Toye later touched one into the net in the 83rd minute to keep tings interesting.

Minnesota pushed push after furious push against the Lions defense, coming close multiple times, but to no avail as Orlando managed to hold.

In Stoppage time, substitution Benji Michel managed to get loose with the ball and put it in the net against Miller in the 98th minute for an additional insurance goal to seal the win.

“We’re very happy to be in the Final. It has been a great tournament and a great opportunity for our players to represent the franchise and the Club.” Said Orlando Head Coach Oscar Pareja “It’s great to have players who take that responsibility and put the weight on their shoulders and appear in the games that mean the most for us. It’s remarkable, but I want to include everybody’s effort. Everybody contributed to this victory and obviously we have some guys who had highlights and tremendous personality in them. They’re doing a great job, we’re happy.” 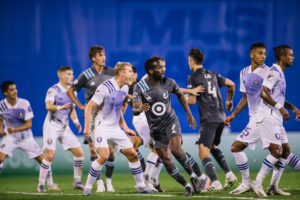 The Lions managed to exude confidence as the Loons pressured them for an equalizer that is a new look for this team. Pareja explains.

“I think there isn’t any secret. The players have understood the idea and the energy and the confidence that they have with that idea is tremendous.” said Pareja. “They’re playing with confidence and they accept each other and they understand that this is a day-by-day growing path.”