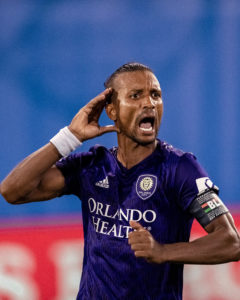 KISSIMMEE, FL – Orlando City FC defeated LAFC in stunning fashion Friday night by taking a penalty shootout for a 1 (5) – 1(4) score at the ESPN Wide World of Sports in Disney World.

Both Orlando and LA had plenty of chances during the match, with Nani getting a penalty shot opportunity when LAFC left back Diego Palacios tripped up Orlando right back Ruan on a slide tackle in the 57th minute. Nani’s shot was blocked by LA goalkeeper Kenneth Vermeer. But Nani would get his revenge.

There was not scoring through 60 minutes, (The Lions held LAFC to 0 shot attempts in the first half, the first time in franchise history the 2018 expansion side was unable to get a shot off in a half. ) until LA got through on their first shot of the match. Diego Rossi  stole a ball from Sebastian Mendez hit a cutback cross that Bradley Wright-Phillips tapped home inside the six-yard box.

Unlike in the past, the Lions refused to give up, and I thing that’s different about this team. They don’t get discouraged, and they don’t give up. 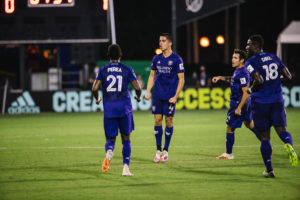 In the 90th minute, Orlando finally found their equalizer in the 90th minute through left back Joao Moutinho. He rose highest on a Nani corner kick, heading home at the back post to make it 1-1. It’s a same there are no fans in attendance because eat stadium would have exploded.

Orlando and LA played through the end of regulation and stoppage time to a 1-1 tie, so the game would come down to penalty kicks.

Moutinho was one of the Lions to convert from the penalty spot for the victory along with Mauricio Pereyra, Kyle Smith, Antonio Carlos. La had missed one if it’s kicks, and they tally on kicks was 4-4 when Nani came up to kick, opening the chance for redemption. Nani confidently put the kick in and Ran the field with his hadn’t cured to his ear in a celebratory charge as Orlando had stunned the Black and Gold. 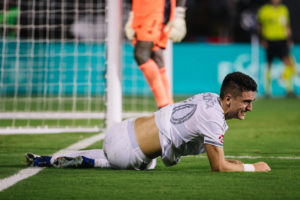 “First of all, I want to say that we are very proud of the group of players who have done an excellent job today and stayed in the game.”Said Orlando Coach Oscar Pareja. “That needed a lot of heart and desire and determination and I think they accomplished that in those 90-plus minutes. The game rewarded them because they were the best team on the field. They were patient in the difficult moments and I want to highlight that, that’s the heart of the team and the Club. We want to share that with our fans and the people who are just starting to believe and the people who have believed in us all the time. We’re ready to move forward, but congratulations to the players.”

Orlando moves on to play the winner of Saturday’s San Jose vs Minnesota match for a semi-final match on Thursday, August 6th.