Tampa, FL – The Tampa Bay Buccaneers signed free agent running back Leonard Fournette three days after he was released by the Jacksonville Jaguars.

Fournette signed a one year deal with Tampa after the Jags ended their three-year stint with the club. They could not find any takers for the running back’s contract.

“We couldn’t get anything. A fifth, a sixth — anything,” coach Doug Marrone told reporters following Fournette’s release.

The fourth-overall pick in 2017, Fournette rushed for 1,152 yards and three touchdowns but his bruising style is no longer favored by many NFL teams, who prefer their starting running backs to be more nimble.

According to reports, the deal with the Buccaneers is worth $2 million, and there are incentives that can boost it to $3.4 million.

Fournette gives the Buc’s Tom Brady another strong option in the backfield to add tho his arsenal of weapons on what is expected to be one of the bet offensive squads in the league.

Fournette is expected to compete with Ronald Jones, LeSean McCoy and Ke’Shawn Vaughn for playing time. 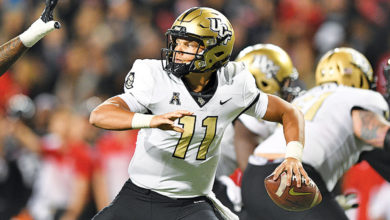